These smart upgrades and fixes won’t cost you a lot of money, but they could help you clinch a deal if you’re trying to sell.

With housing prices increasing, now is the time invest in your home to capitalize on its value. Here’s what veteran real estate professionals from around the country have to say about what home improvement projects pay off, whether you are selling now or in the future. 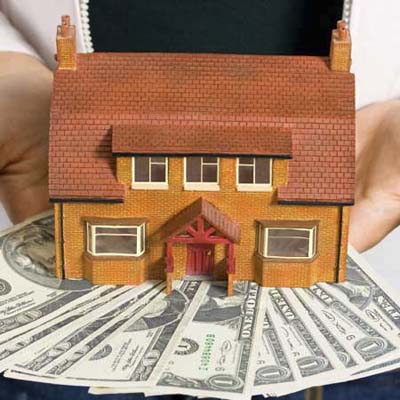 Knock out a non-structural wall, or even remove that kitchen island. Anything that opens the space and creates a sense of flow in the house is generating a response from buyers who can afford to be choosy. For the price of a few hundred dollars, you’ll transform the feel of the house. “Right now buyers want a wide open floor plan, the living room right off the kitchen. They are into big spaces,” says Kristin Wellins, Senior Manager of Program Development for ERA Real Estate.

Seattle broker Reba Haas says a kitchen island can be an asset, creating needed storage space. But if the kitchen has enough cabinets, it could pay to haul the island away. Haas says homeowners might want to consider a moveable island. “You can adjust them to your needs,” she explains. 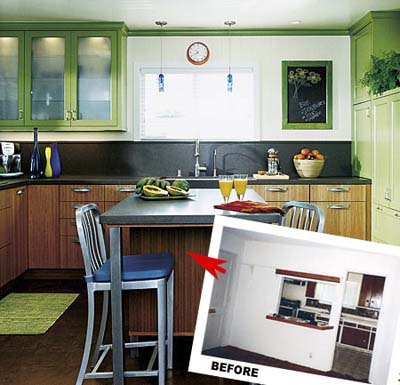 Tangled trees and unkempt bushes can obscure views, darken interiors, promote mold, and block a good look at the house.

“People forget about their trees more than almost anything,” says Roger Voisinet, a thirty-year veteran of the Charlottesville, Virginia real estate market. Yet, landscaping is one of the top three investments that bring the biggest return. According to a 2007 survey of 2,000 brokers conducted by HomeGain, an online real estate marketing site, an investment of around $400 or $500 dollars in landscaping, can bring a return of four times that. “It could really make a significant difference in the price. Nobody likes to spend money, but landscaping might even be the most important thing, even if owners have kept up the house,” says Voisinet.

Reba Haas agrees, “Overgrown landscaping is a problem at all price points.” Haas says it hurts with marketing too. “People say, ‘Where’s the house?” If buyers can’t see what they are getting, they just move right on.”

And if neglected, mother nature may go wild at considerable cost. Voisinet looked at one house recently where a fallen limb from a poorly cared for tree caused $2,000 in damage. 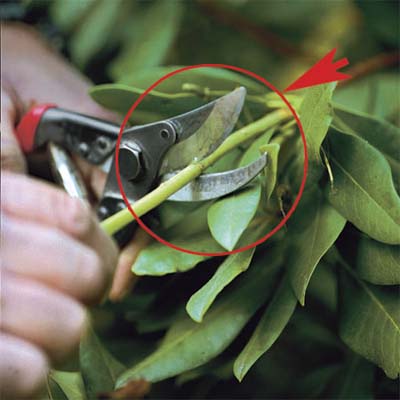 The number one item on the 2007 HomeGain survey, lighting—everything from a dimmer switch to the increasingly popular sun tubes—noticeably enhances a home’s appeal. California broker Robert Bailey says, “Dimmers allow you to create a mood.”

He’s a booster of sun tubes, too. Less expensive than framing in a skylight, sun tubes—also known as light pipes, sun scoops, and tubular skylights—use reflective material to funnel natural light from a globe-capped hole cut in a rooftop down through a ceiling fixture and into a room. Bailey says, with tubular skylights, sunlight is nice, and moonlight is even nicer. “I’m putting six of them in my house. I don’t need a skylight, but I do want the natural light.”

A few other ways to lighten things up: Fix broken panes, make sure windows open, and consider lights that use motion detectors to turn themselves off. Remember high wattage bulbs make small spaces feel larger, and soft lighting brings warmth to empty spaces. 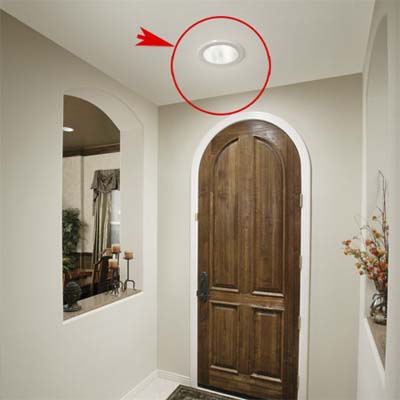 4. Don’t Put Off Care and Maintenance

Before thinking about a fancy upgrade to the kitchen, address the basics. Insulate the attic, repair plumbing leaks, replace rusty rain gutters, inspect the furnace and the septic system, replace or repair leaky windows, install storm doors, weed the flower beds. As broker Robert Bailey says, “What you don’t notice as a weed, I see as a weekend of work.”

These kinds of fixes go a long way toward value. Jessica Gopalakrishnan with HomeGain says, “Starting with a couple of hundred dollars on a few things could increase the value of your house by a few thousand dollars. People are surprised by that. It’s exciting. People think they have to put in a lot of money to see a big difference and they really don’t.”

Investing in maintenance and repairs is not only moneywise; could also be crucial to a sale. Brokers and agents from across the country say the houses that get attention in this buyers market are in tip-top shape. John Veneris, the regional vice president of the National Association of Realtors in Downers Grove, Illinois, says, “What’s important in this market, now more than ever, because there is so much inventory, the houses that sell are in pristine condition and are priced to the market.” 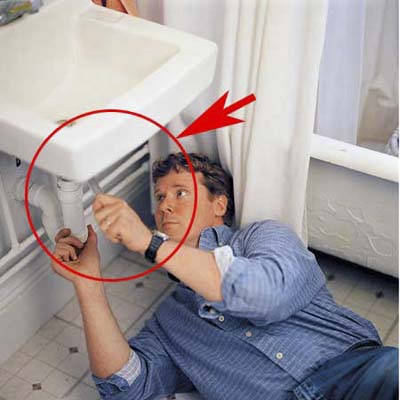 If maintenance and repairs are in hand, Virginia broker Roger Voisinet says put the greenbacks into green efficiency. If your heating or air conditioning systems are old, “new ones are so much better, with savings of up to 30 to 40%.” Another example he points to: for $7,000 for the unit and installation, with $2,100 back in green tax credits, a solar-powered water heater could save you as much as 80% on your water-heating bills.

Research published by The Appraisal Journal estimates that energy savings add twenty times the annual savings to the value of your property. Though Roger Voisenet cautions, “a lot of appraisers don’t know that yet,” he says buyers appreciate now what appraisers will recognize later: Energy savers make your house more desirable. Says Seattle broker Reba Haas, “Do the update green, because everyone is now, for the first time in five years, asking about the utilities.” 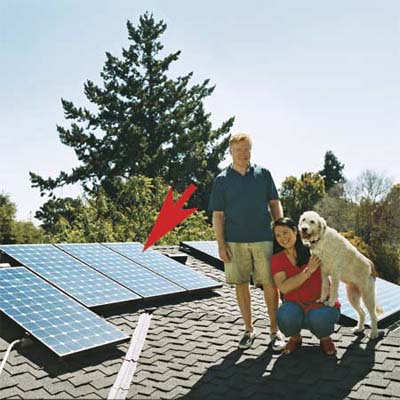 6. Home Begins at the Front Door

ERA’s Kristin Willens says, “Don’t underestimate the power of a front door. People make up their minds in the first seven seconds of entering a house.”

Surveyed brokers like a working doorbell and Voisinet says don’t forget an overhang, such as an awning or portico, above the front door. “If you don’t have a way out of the rain, or shelter from the sun while you are fumbling for your keys, you are really missing out.”

If you’re up for more exterior upgrades, move to the back or sides of the house. John Veneris, the regional vice president of the National Association of Realtors in Downers Grove, Illinois, says, “People get back dollar for dollar for the decks they put in.” Even in the snow-laden housing market of Craig, Colorado, Realtor Vicki Burns says the right deck on the right house can be an eye-catcher. “I had a home come onto the market with a small yard. It was about 20 by 30. The owner had encompassed almost the whole area with a deck. The buyers really liked that. It dressed it up and enhanced the area, making it an extension of the living space.” Burns notes, “If the deck is done with the right material so that it will stay nice-looking and in good shape, it’ll hold value.” 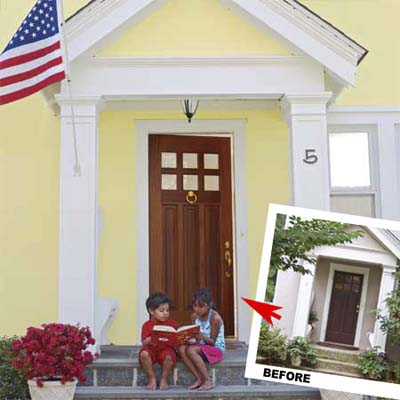 Don’t undervalue the materials you’re standing on. Ninety-four percent of real estate pros recommend spending some money on floors. But it doesn’t have to be a lot of money. For an estimated average investment of $600 to $900, brokers report that the return in value comes in at up to $2,000.

And you can spend even less than that. A few well-placed nails can eliminate distracting squeaks. Other small projects with a big impact include repairing broken tile, patching damaged floorboards, and tossing out the wall-to-wall carpeting.

In some cases, however, a new floor is in order. Broker Reba Haas says one would-be seller’s house might’ve sold were it not for a kitchen floor that drew questions from buyers. “The number one problem was the fact that her floor was really personal: blue and green vinyl. It clashed with the other upgrades in the kitchen. Everyone kept saying, ‘That kitchen!'”

If you want a wood floor that holds value, Reba Haas suggests engineered hardwoods. If you like cork, she says floating cork wears better than cork tile which is glued down and can peel. 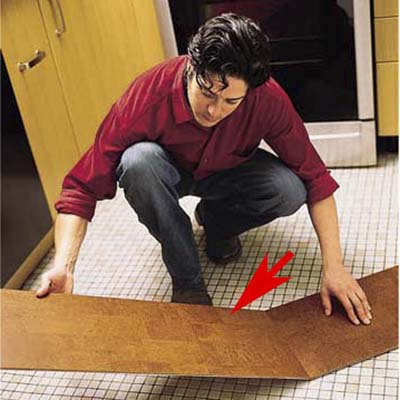 Brokers, one and all, say spiffing up the kitchen and bath is a sure bet for adding value to your home. Surveyed brokers say these kinds of improvements can get expensive. It may not be economical to do a major renovation if you are trying to spend as little as possible before putting a house up for sale. But some upgrades are cheap, easy, and fast…, especially in the bathroom.

Replace frosted glass for clear glass, clean the grout, remove rust stains, apply fresh caulk, update doorknobs and cabinet pulls, replace faucets, and install a low-flush toilet. Even buying a new toilet seat can make a difference. Bailey says, “You can spend $500 on a bathroom, and it’s totally tuned up.” 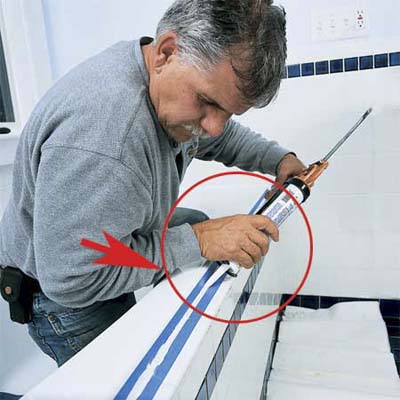 If you’re getting ready to put a house on the market, don’t allow walls with chipped paint to go unmaintained. If you need to do more than a touch-up, choose neutral colors.

Broker Reba Haas says, “Get out of your personal taste.” She says buyers want to be able to project their own ideas onto space, and sellers can help with the toned-down wall color. 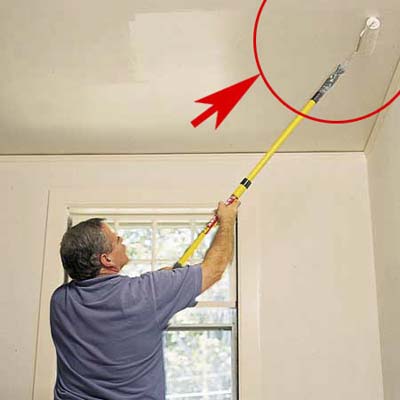 10. Remove the Question Marks from Your House

Haas calls it the “What’s that?” factor, and whatever it is (1950s wallpaper in a 1930s bungalow, a broken front step or cracked threshold, green-and-blue vinyl flooring), fix it or remove it. She recommends getting the impartial advice of a friend who can tell you what’s drawing attention and raising questions for the wrong reasons. “The more questions, the more people are likely to say, ‘We don’t want that house.’ Sometimes it’s the quick fix that someone put in thinking, ‘I can live with it.”’ Haas says those fixes bite you back later when it’s time to sell because prospective buyers are looking for more than jerrybuilt solutions. 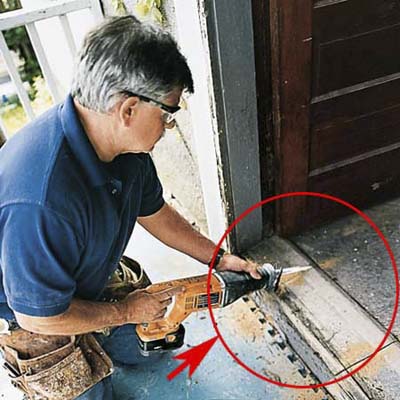 Illinois Realtor John Veneris says homeowners can enlist the help of a trusted real estate professional to consult on what changes to make. “The realtor will keep them informed of changes in the marketplace. So they really need a team approach with the realtor…and a bit of patience.”

Veneris says patience may be rewarded sooner that you might think. 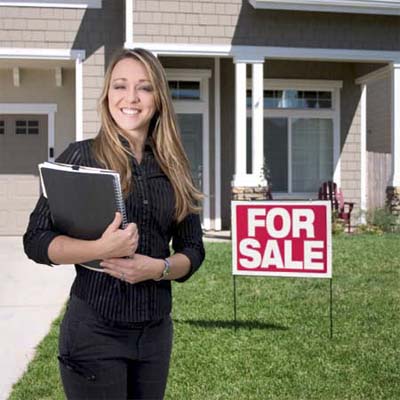